The Realistic Highway Mod can be downloaded at http://xlnation.city/resources/realistic-highway-mod-rhm2.371/.

The RHM works with mosly one-way highway roads with different capacity (depending on the N of lanes):

On all of them the speed limit is the same as of the original game highways. Please notice that the guard rail should be to your left when you drive the highway. Try to use one method of paving (from upside down or the opposite) so you won't get confused.

There is a one-lane highway that serves as the basic on/off ramp, although you could also use two lane highway for this purpose. There are also bridges/tunnel tools which are not on the highway menu but at the road one under bridge function.

Finally, note that the RHM highways cannot be used for City-Links! You have to switch to the normal highway for that purpose, and there is a handy connector piece included that allows easy connection.

It is possible to smoothly change the N of lanes, without interrupting the traffic - this is also the way to attach on/off ramps. You can also split a highway in two thanks to the innovative connection system, used by the mod. You can connect directly the end of each highway to normal roads (unlike the original highway); but note that it still doesn't allow your buildings road access! Connecting in this way, however, will produce junctions, and resulting traffic problems, whereas the internal highway connections, lane changes and on/off ramps connections don't produce junctions and allow free traffic continuity.

These are the basic highway tools of RHM:

Beside the basic tools, which appear visually on our screens, the RHM uses a set of invisible connector pieces to govern traffic without junctions. They allow direction of traffic and addition or subtraction of lanes.

And here are the basic Connectors of RHM:

The directions are pretty self-explanatory. Tool N 19 is a connector of 3 lanes X 2 to the in-game Highway for those who wants to use the in-game Highway as well. All these connectors are crucial for the functionality of the mod and they give us great flexibility and basically will help us create what ever comes in our minds.

The RHM uses a combination of the normal construction method of CXL (point to point dragging and confirming) with a method combining the various Highway tools with the help of the invisible connector pieces (appearing on the screen as small arrows). Each of the main highway roads (N 2, 3, 4, 6, 8, 9, 12, 13, 14, 17 in pic 1) can connect via the transition tools (N 5, 7, 10, 11, 15, 16, 18, 19 in pic 1) to on/off ramps (N 1 in pic1), or to each other. For every transition you must use the relevant connectors, that you have to attach to the END of the highway (you can't place a connector in the middle of a stretch of highway). Each piece will snap to the others, if it is used correctly. If the piece doesn't snap - there's a problem.

For example if we would like to split a 4 lane Highway into two highways of 2 lanes each - then we would use the #12 connector (pic 2).

Splitting one lane in two

Remember that connectors will be marked as arrows on the road, and will basically function as buildings: meaning that you can not see any cars on them, and they will be slightly raised (see the grassy green patch on the right). You want the connectors to snap into the road tool, pointing in the same direction as the flow of traffic. Only the connector associated with your choice of road will snap to the road, others simply won't snap... don't worry, you will feel it.

It is an another example of splitting/merging two and three lanes. This method suits a 2-lanes Highway.

Here is an example of 3 to 5 lanes paving:

Note how the highway tools are always used in conjunction with the connector pieces.

This method can be used when we want to pave a 2-lane integration way instead of the simple one-lane on/off ramp. It's great for when you build a 3 or 4 lane highway which has bigger car capacities, and therefore ramps need to be bigger, to allow for the increased traffic. You can see the expanding process from 3 to 5 lanes, and then the splitting of it into the integration way (could be used as a ramp) and the highway (traffic won't get interrupted by exiting vehicles).

Don't forget to check if your system is CONNECTED and functional!! This could be done by setting it up as a bus line, to see if the circuit is completed. If it is not then you will want to check where it gets stuck, and fix the connection.

Here are more complex interchanges and ramps that could be built by this mod. It may take some time but it's great!

Highway over road: very simple and easy. you can make it small/large with one/two integration roads. 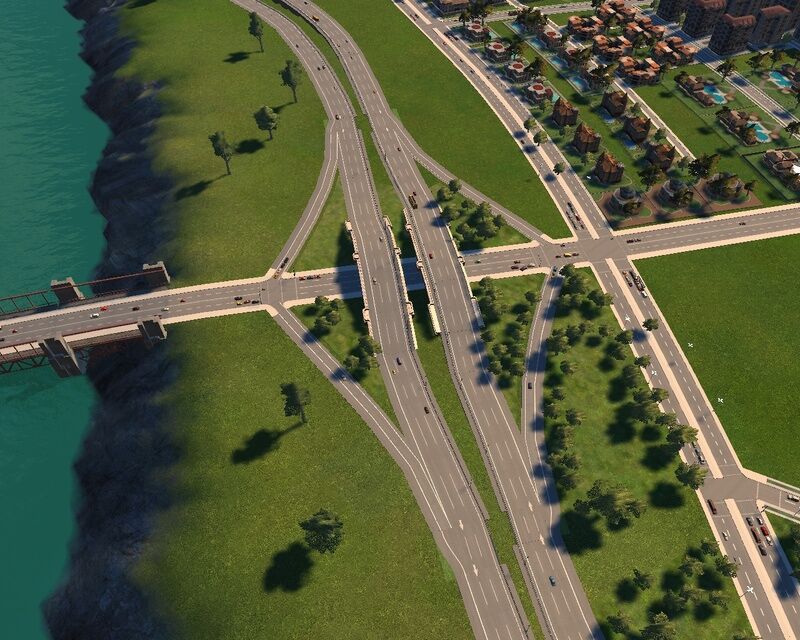 Avenue over Highway: this one a bit harder than the one above due to the 2-lanes integration road. (we need to use 5 lanes to 3+2 connector and many others): 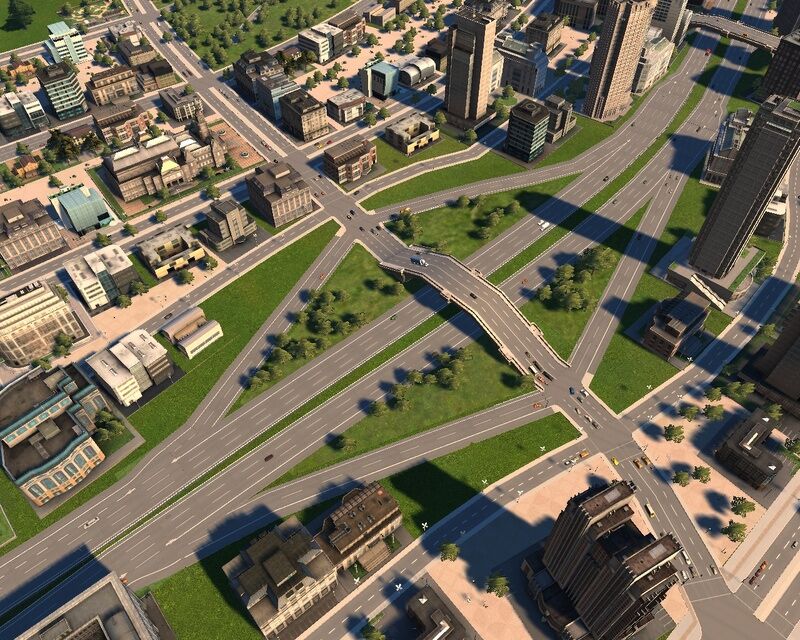 Basket ramp: I like this one the most, you save many connectors when building this. (check out the integration road): 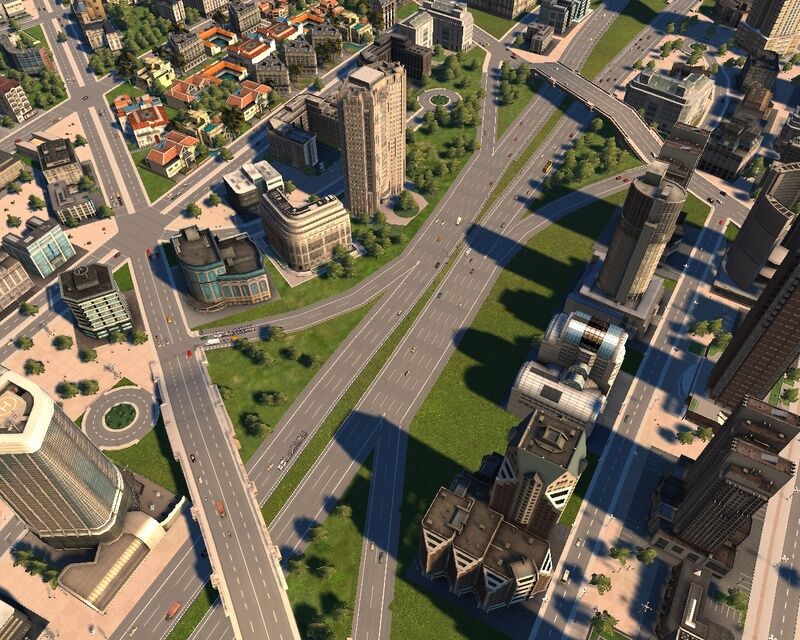 Roundabout ramp: small, beautiful and not hard to build but not very efficient. actually it causes many traffic jams 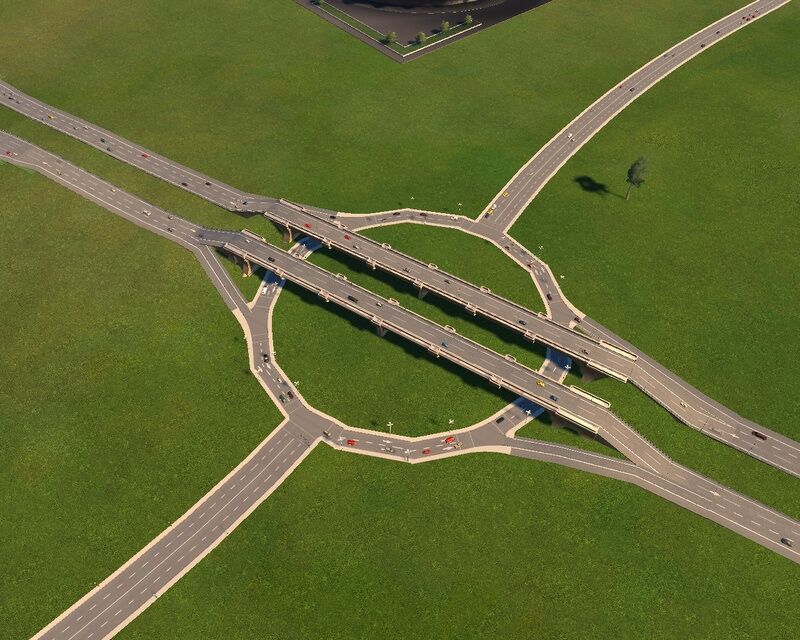 Connecting two highways into 3 directions without any traffic lights.

Trumpet: quite easy to build: 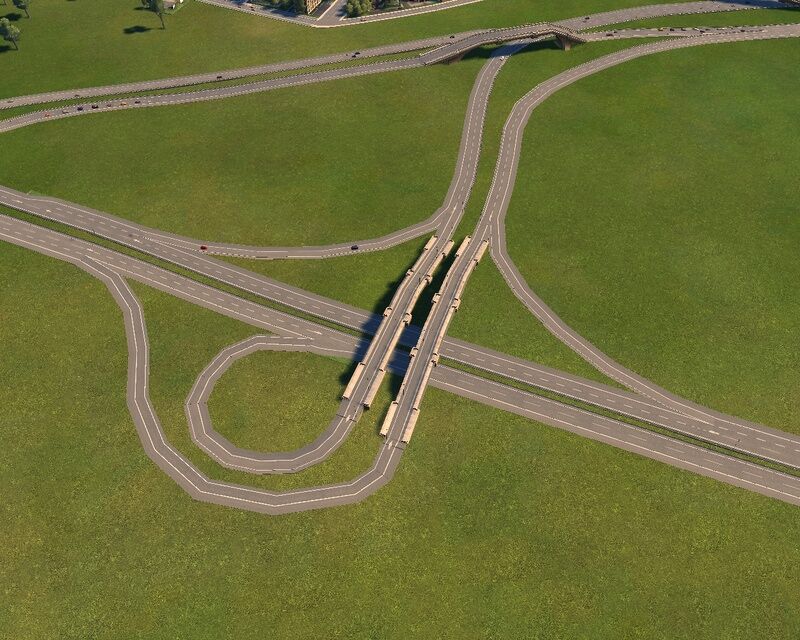 Full Y: hard to build but quite efficient: 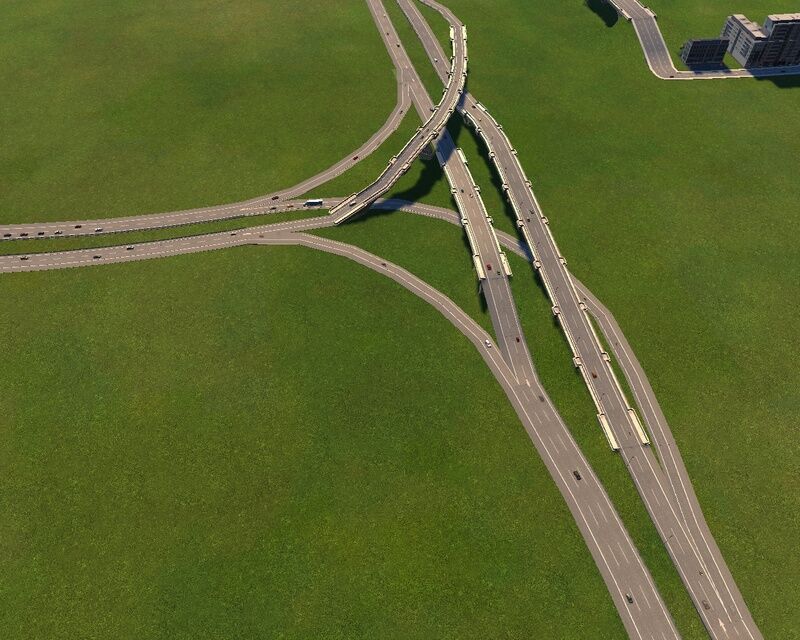 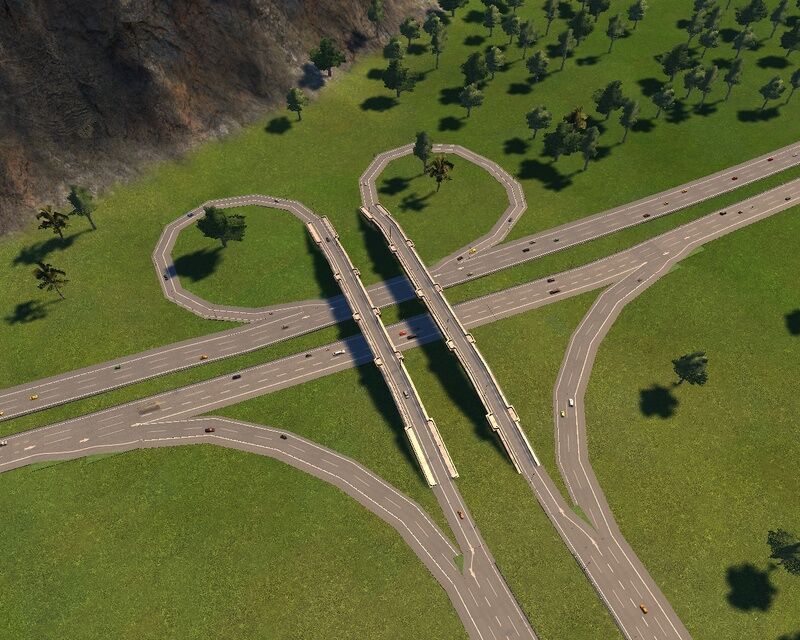 This is the most effective way to connect two highways into 4 directions. Those kinds take more time to build.

Roundabout interchange: this one is 3 floors interchange and it includes ramps. hard to build but very effective: 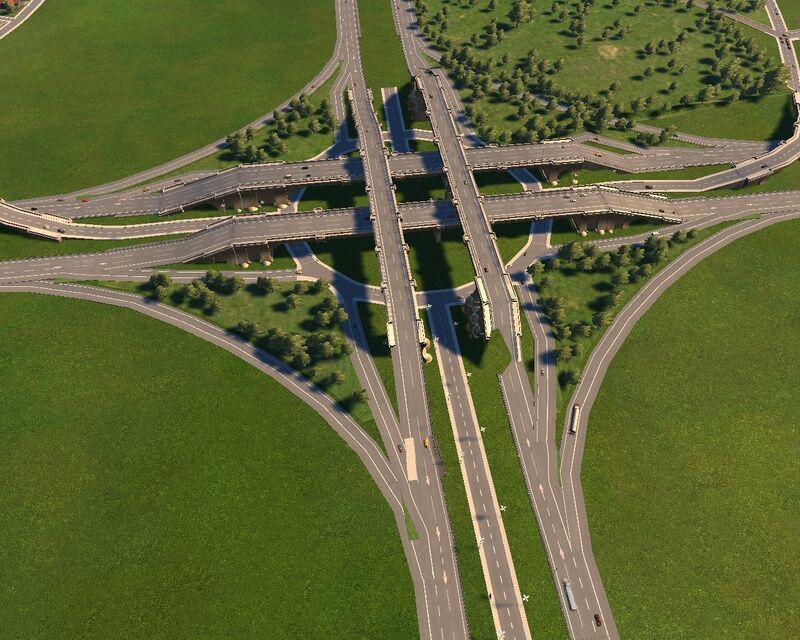 Two-level cloverstack: it took more than 3 hours to build!! But I like the results, it has nice curved background lines unlike the one above: