Notre Dame de Paris ('Our Lady of Paris' in French), also known as the Notre Dame Cathedral, is a Gothic, Roman Catholic Cathedral on the eastern half of the Île de la Cité in the fourth arrondissement of Paris, France. Notre Dame de Paris was among the first buildings in the world to use the flying buttress (arched exterior supports). The building was not originally designed to include the flying buttresses around the choir and nave. After the construction began and the thinner walls (popularized in the Gothic style) grew ever higher, stress fractures began to occur as the walls pushed outward. In response, the cathedral's architects built supports around the outside walls, and later additions continued the pattern. [1] 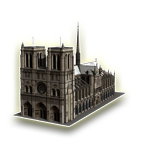