The Metro System in Cities XL 2011 is the second Mass Transit option. It runs mostly underground, so unlike Buses (which run on roads) it won't affect and is not affected by road traffic, and it can be traced in almost any way you want! The other major difference is the capacity (much larger transport capacity), and price. These are the best means of improving Traffic Flow.

The Metro system is similar in complexity to the Bus system. To use the metro, the player must first place a Metro Company in the city. He can then start placing metro stations - a 40x40m ground building that needs road access, and also has an underground part (so you can't run other tunnels right underneath). Note that stations can only be placed at a certain depth - the metro track, however, can also go overground. When the player places his first station, he will automatically start tracing the track of the first metro line. The process is similar to building a tunnel (using points to change direction and height), and each click will attempt to place another station, unless there is an obstacle on the ground. You can, however, change the depth slightly, as to prevent station placement, and then use the familiar point system for the necessary adjustments. Unlike a tunnel, a metro line never needs to come to ground level, if you don't need it to!

The track can form bridges over bodies of water or ravines but the tunnel to bridge system does not have a very large amount of leeway and needs enough space. To finish the first line, simply click again on the last station you've placed.

You do that the same way you add lines to the Bus system - by clicking on the Metro station icon and building a new one, or clicking over an existing station, which will trigger the line interface. You can hook up different lines to the same stations and if enough stations are reused in an existing line, the new metro line will use a portion of the metro tunnel already in place. Generally, however, metro tunnels can't intersect - they have to pass on different levels (one over/under the other).

There is currently no way to 'extend' a line (that is, add more stations to it), but there is a workaround:

The Metro has much bigger capacity than Buses, and its Stations have a bigger coverage area. Generally, however, you have to consider the fact that a Metro line will have far less stations (stops) than a Bus line, and keeping in mind the maintenance price of each station, you should plan their placement really carefully. Crossing metro lines should happen on stations (two lines can use the same station, as we pointed above), since this facilitates pedestrian connectivity. Placing bus stops nearby is also highly recommendable, so that people can switch from Bus to Metro transport and back. Pedestrians will not cross roundabouts to reach metro stations, so keep these well apart.

Citizen classes again have preferences when it comes to Metro. You'll note that the general trend is for higher classes to use Metro (Skilled, Execs), but Unskilled by no means will refrain from using it if it's convenient enough. The Metro with its high passenger capacity is the ideal form of transport when connecting two distant parts of the map, like a large Industrial and Residential districts.

Buses and Metros together will reduce road traffic (and pollution too).

Management of the system is similar to the Bus system, and is accessed via the same panel. You can choose the size of train for each line (again, three possible sizes), and thus control general capacity along with maintenance costs. The financial cost of a metro line is very big - more than twice that of a bus line, however its maximum capacity and the absence of additional problems related to it (traffic, noise) makes it worthwhile.

The overall cost per line depends of the length of the track (since here we have a separate track, not a road which is already build and has its own maintenance cost), + of course a fee for each station. Also, the larger the trains that run on the line - the higher the cost. 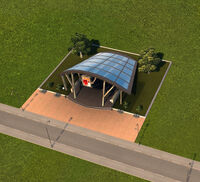 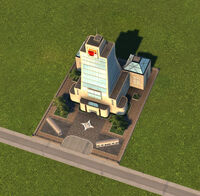