This is an original Bus tutorial article, created by Stan from Focus Home Interactive. Here you will find detailed information on how the Bus system works. Edited by Soltan Gris.

What is the Bus system?

The Bus system is a brand new feature that allows you to implement a bus network in your cities. You will be able to choose the itineraries of each bus line as well as the location of the terminals. To that end, a tutorial is now available ("Public Transport" >" Bus Lines"). It will help you managing this exciting feature.

How do I unlock it?

You need to have at least 50,000 citizens in your city to unlock the Bus system.

How does the Bus system work?

Once you've reached 50,000 citizens, the Bus system will unlock in your construction menu. 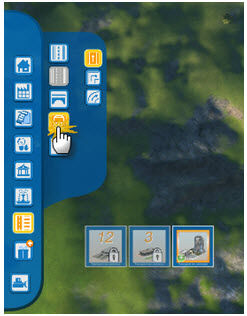 You can choose between 3 buildings:

The most important one is the Bus Company by which you can manage the entire bus network. You need to place it first in order to unlock the terminals. 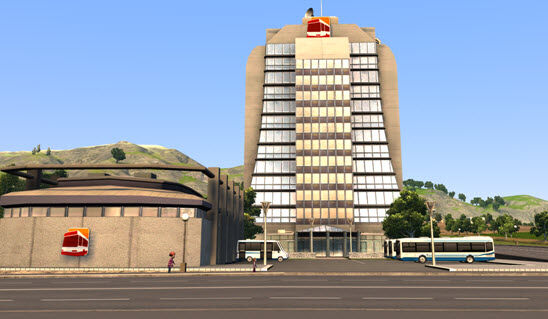 You can build two kinds of terminals: with the Great Bus Terminus you will have the ability to place up to 12 bus lines... 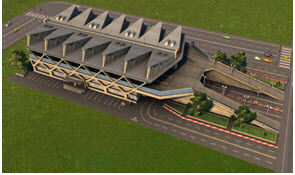 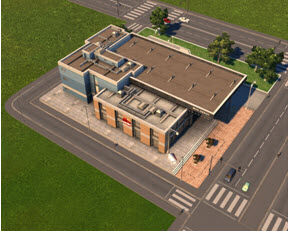 Terminals are also public services: you don't need to place them next to roads with high "Freight" and "Passengers" rates.

Placing a terminal will start the Bus line placement sequence - from there on you just need to trace its route along roads. Note that you have to observe traffic directions (on one-way streets)! Each time you click, you'll place a bus stop (which doesn't take any space on or along the road). 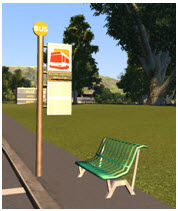 The amount of terminals you can place is unlimited but you can only place 40 stops per bus line. Note that you need to terminate the line back at its original terminal - it has to 'go round'. When you have traced the line back to the terminus, simply click again to confirm it.

- Tips: While you're tracing the line, you can put stops close to other bus lines' stops to allow passengers to switch lines. The stops numbers will grow bigger to show when they are close enough for an easy transfer to occur.

- You cannot create bus stops on farms roads, or expressways. Buses are not allowed on Highways altoghether.

Be careful! - Placing too many stops can increase the travel time and force people to use their car instead. - If you delete a terminal, all the connected lines will be deleted as well.

How much does the Bus system cost?

The terminals' monthly cost depends on the amount of bus lines.

NB: the longer the bus line is, the higher the upkeep costs are.

What is the effect of the Bus system?

The Bus system will help you to get rid of traffic issues. Your citizens will have the possibility to use public services instead of their cars to move around the city or to go to work. The more stops you place, the more people can use the line. 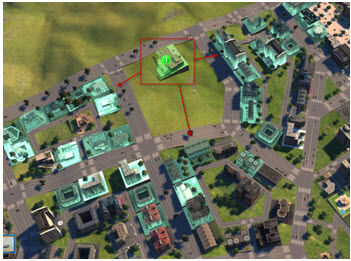 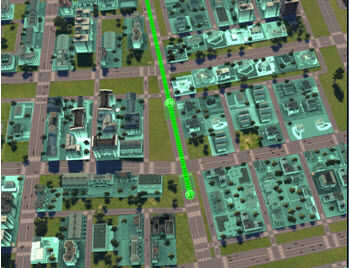 As a matter of fact, both terminals and bus stops must be placed strategically. Check the blue zone appearing around the terminal / stops you place: it shows you all the buildings that are potentially served by the line. Note that how many of these will actually end up using the line depends on how well you've planned your Public transit networks.

The different types of citizens don't consider the bus the same way. For instance, Unqualified Workers don't mind taking the bus while Elites will do it only if they have no other choice. In a nutshell, a city with an efficient bus network will suffer less from traffic and satisfaction issues.

How can I manage my bus lines?

New layers have been implemented so that you can manage your bus routes efficiently. You can find these layers in the menu on the right side of the screen.

The "Bus Lines" layer displays all the lines and stops that you have built in your city. 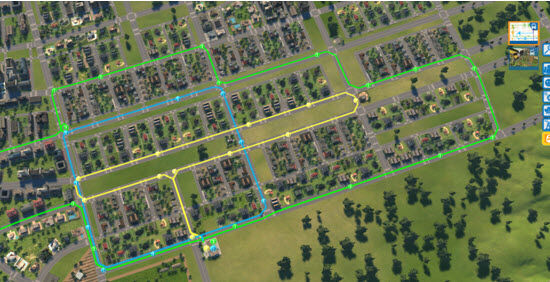 The "Bus Traffic" layer shows you the state of your bus lines' traffic. The color system is the same as the one used for the roads (green indicating a fluent traffic, yellow a bit of congestion and red a traffic jam).

You can also manage your bus system by clicking on any given terminus. The following information window will appear: 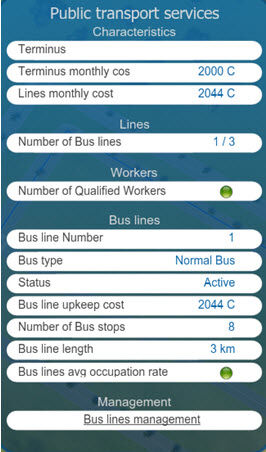 As you can see, it gives you a lot of information such as the number of stops and the upkeep cost of each line. Also, you can select each line individually - it will show only the route of that line, and light up the buildings that use it. 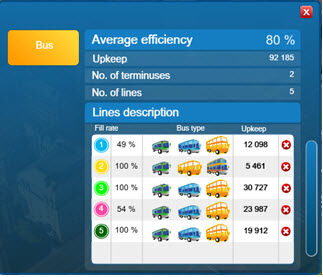 The most important information is the "Average efficiency" of your bus network. You will also find a list of all the bus lines of your city, number by number, with the possibility to delete them (

). For each line you'll be able to see individual fill rates (how full are the busses currently), and also current maintenance cost.

Finally, you can modify the type of bus you want to use for each line.

They represent three different transportation capacities: a minibus costs less and hosts a small amount of people, whereas a double-decker costs much more but can host more citizens. To select one specific bus, simply click on it.

How do I create a new bus line?

Go to the construction menu, click on the terminus and place it. You can create your first bus line straight after placing the terminal.

Tips on creating an efficient network

Usually you won't need to place Buses until you reach 70 - 80 000 population (that is, unless you have created a really inefficient road network). Buses, and all other Public transport is useful as means of relieving traffic issues and preventing the negative environmental effects related to scores of cars on the same street.

To check where a Public transport line will be most useful, open the Traffic layer and see which roads are yellow or red - you can also click on the red roads and display the Car routes to check where do all cars that pass there come from, and where do they go. Next, simply plan a Bus line that connects roughly the places you've seen as the source and the target of the movement. Remember that your citizens move from their homes to work and back - that's what creates street traffic.

Note that sometimes the Bus line will get overcrowded even with you using Double decker buses - this is the time to plan a second line parallel to the first one. Or use a Metro line.

Keep in mind that Buses are not the only type of Public transit - Metro lines have a much bigger carrying capacity, although they come at much higher maintenance cost. Later in the game you will need this capacity to connect big districts, such as an Industrial district with the rest of the city. Then, you can use Buses to 'cover' the neighborhoods that remain away from the Metro line, connecting them to Metro stops. Remember that your citizens are willing to walk several blocks to change means of transport!

Buses and Metros together will reduce road traffic (and pollution too).

Credits to Stan from Focus who posted the original post in the Forum: http://forum.citiesxl.com/viewtopic.php?f=16&t=182