Blueprints are plans for very big buildings called MegaStructures, and most of them are famous real-world buildings. Unlike other buildings in the game, the Megastructures don't appear instantly, but have a built-over-time mechanics related to their construction.

First, you 'acquire' the Blueprint for the relevant building, placing down the construction site in the location of your choosing. Then, you need to start the construction itself - to build even one Megastructure, you need many resources and quite some cash-flow for the maintenance fee. Once finished, though, the Megastructure is well worth the investment: some MegaStructures will boost various satisfaction levels, others will increase production of a resource, and most will also boost your city tourism, creating a huge buble of Quality of life around.

Megastructures were intended to be one of the uber features of the Planet Offer, and their building was even more elaborate in its days. The first stage was for you to acquire the Blueprint in the first place. There was a weekly lottery that offered Blueprints to each player, and each offer was only valid for a limited time. If you decided to 'take' the Blueprint, it was placed in your account and made available in all your cities. You then had a limited amount of time to start building it somewhere (the actual construction process was the same as it is today), and if you missed the deadline you simply lost the blueprint, and with it the opportunity to build this Megastructure. It was also possible to 'trade' or 'exchange' Blueprints with other players on the same Planet. a part of the online community effort Monte Cristo was promoting. Some Blueprints were much more rare than others (meaning there was less chance of them appearing in the weekly lottery), which encouraged players to 'collect' the most interesting or rare buildings.

After the end of the Planet Offer the Blueprint mechanics were implemented into the Single mode and made available in Cities XL 2011. You now have all available Blueprints for building with no strings attached.

The purpose of Megastructures, besides the addition of cool real-life buildings in your cities, is to introduce an additional feeling of challenge, where you not only plop down a building when you have the money, but you need to actually do stuff and spend some time erecting it. The construction process is divided in several Stages (or Phases), and for each one you'll need to concentrate a certain amount of your city's resources to push forward the process. There is a different set for each Stage, and the closer to the maximum amount of tokens you allocate, the faster the construction will go. But even in the best of conditions, it will take at least 5 – 6 hours of real time to complete even a 'small' Megastructure. Some of the more elaborate ones take as much as a day, and if you don't have many resources to spend, the process could go for several days. Here are the steps you need to take in order to build a Megastructure:

All Blueprints are found under the menu called 'Packs', divided between the Americas Pack, Asian pack and European Pack, according to their real-life location. 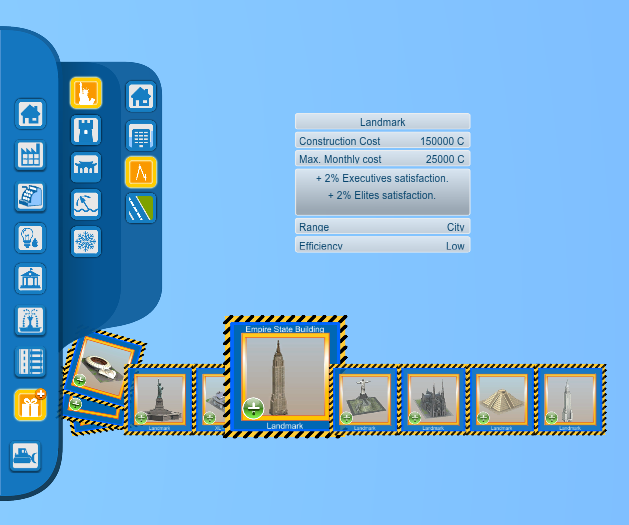